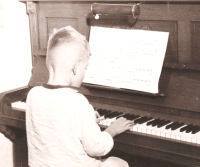 The live of Henk Wieman is closely connected with music. As a 5 year old boy, he started playing the piano; at 7 he went to the school of music and at the age of 15 he gave his first piano concert.

At the age of 19, Henk Wieman played the piano with Jasperina de Jong’s Theatre Tour “The big Ego-trip”. In the years after that he accompanied, among others, Harry Sacksioni.

Classic as well as light music

At the same time, Henk studied classical piano with Herman Uhlhorn, at the conservatory in Utrecht, Having finishing this study, he studied “Light music Jazz”, with Rob Franken (the exam-commission “Light Music” consisted, among others, of Jerry van Rooyen, Rogier van Otterloo and Tony Nolte. They awarded him an 9, the near highest possible score).

This made Henk Wieman the first musician with conservatory degrees in both classical and light music Jazz. After graduating “light music Jazz” he worked at both institutes.

The imposing state of service as a musician, Henk combines with his passion for music teaching. With his own company he developed his own audio teaching method. He composed hundreds of melodies to be played by students, and visited almost every school of music in the Netherlands.

Composer from the heart

Some years ago Henk Wieman began to write his own compositions. From these he published 2 cd’s: “Into your Heart” and ‘’For You’’. He succeeded in translating his emotions into music, and added something more: the impassioned performing of his own music. It’s music from the heart.

“Henk composes increasingly more. He translates his emotions in music and, as a romantic pianist, adds something more: an impassioned rendition of his own musicality. Henk´s music soothes, puts things in perspective, difficulties flow away and dissolve. You will find yourself listening with your heart.”